DMC Laos - Sharing borders with Vietnam, China, Myanmar, Thailand and Cambodia, Laos is a country where you can still experience traditional Southeast Asian life at its best. Laos is a slowly awakening land dominated by the mighty Mekong River, framed by rugged tall mountains, with monsoon forests, gorgeous waterfalls, underground river caves and populated with friendly people whose lives are devoted to Buddhism. Everywhere you find monks in their brightly coloured saffron robes and the country is dotted with gilded Buddhist temples. You can still see some of the French influence from its colonial days, but many places are still almost virgin territory and worth exploring. It also boasts a fabulous local cuisine. In short, Laos is a real treat to visit.

Further down the page: Read about our company * Travel facts Laos. There is also a map of our country and our latest Laos travel news.

This email address is being protected from spambots. You need JavaScript enabled to view it.

This email address is being protected from spambots. You need JavaScript enabled to view it. 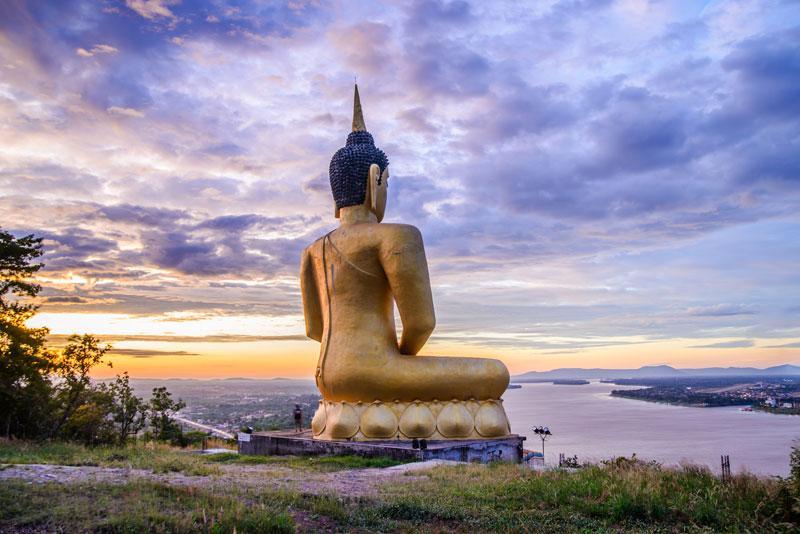 Ban Phanom
Just outside Luang Prabang is Ban Phanom, a small village well-known for its hand-weaving of cotton and silk. It is an opportunity to see both the weavers at work and the vast range of goods produced. Large wall hangings are suspended from the rafters and shop fronts. Most have geometric designs and patterns but some have pictures such as animals. Other goods include shawls, vests, sarongs, bags and backpacks. As this village is a regular stop for visitors buying can be a real test of your bargaining ability. Treat it as fun and don't be in a rush. It can be a great afternoons entertainment.

Champasack
This is one of the main political and economic centers of Lao PDR and situated in the southern part of Laos. People of Champasack province settle along the bank of Kong Se Done river. In this province you will find ancient temples which were influenced from the Angkor in Cambodia.

Four Thousand Islands
Just as fascinating but less well-known is the area in southern Laos along the Mekong River adjoining Cambodia known as Four Thousand Islands. Here there are islands ranging from large permanently inhabited ones to small sandbars. With the river reaching a breadth of fourteen kilometres it is possible to travel among these islands and see fisherman using hand nets and canoes paddled by oars, freshwater dolphins, colonial villas, impressive rapids and waterfalls, a railway bridge and rusting locomotive and village life at its most relaxed.

Luang Prabang
Luang Prabang was the ancient capital city of the Lane Xang Kingdom (the ancient name of Laos). It was declared as one of the world heritage city by UNESCO. Luang Prabang has a lot of historical and cultural landmarks that are indescribably beautiful and unspoiled by the modern world.
Phra Thaat Phou Si - was built in 1804 and situated on top of Phou Si mountain in the center of Luang Prabang city. If you want to go up from the base to the top of Phou Si, you have to climb up the 328 zig-zag stairs up the hill slope. From the top you will be able to see the view of the city, from there you can also see the National Museum (used to be the King's Place). It has been told that you are still not in Luang Prabang unless you visit Phra Thaat Phou Si.
Wat Xieng Thong - This is the most beautiful wat (temple) in Luang Prabang. It represents the truely Lao architecture and reflecting the lifestyle of the people of Luang Prabang. Wat Xieng Thong was built in 1560, it houses the royal urns used during a royal funeral ceremony.

Mekong River
The Mekong River (known in Tibet as Dza-chu, China as Lancang Jiang and Thailand as Mae Nam Khong), is a major river in southeastern Asia. The Mekong crosses Yunnan Province, China, and forms the border between Myanmar (Burma) and Laos and most of the border between Laos and Thailand. For the adventurers and thrill-seekers, it is possible to travel from Luang Prabang to the Thailand border at Huay Xai along the Mekong River by "fast boat".

Plain of Jars
Here large stone jars weighing up to one ton are scattered over bare hillsides. The latter a legacy of the Vietnam War. Another interesting sight which has resulted is the use of bomb casings in nearby villages for uses as diverse as feed troughs for pigs, stilts for rice barns and planters for herb gardens. Even today with all the advances in science and technology, the origin and use of these huge jars still remains a mystery, just like those of Machu Picchu, Easter Island and the Nazca Lines.

Vientiane
Vientiane is the National Capital City of Lao PDR. It is the political and economic center of the country with the population of 500,000. Vientiane is located on the curve of the Mekong river which is a natural border with Thailand.Thaat Luang Stupa - the national symbol of Laos. It was built in by King Xaysetthathirath in 1566. Thaat Luang was once destroyed by war and was restored in 1935. It has been said that if you do not visit Thaat Luang you do not arrive Laos yet. This is a must place to visit.

Wat Phou
Wat Phou - one of the most fascinating ancient sites in Indochina. Wat Pou was built along the slope of Pou Kao mountain and dated from the 6th century to the Angkor period of the 9th to 13th centuries.
Khon Pha Pheng - this is the Mekong waterfall dropping 20 meters and the widest waterfall in the world. It is also the biggest and most beautiful waterfall in South East Asia. Because of the strength of the water flow, no one has been able to travel through it by boats.

Xieng Khouang
Xieng Khouang is located in the north of Laos. Most of its landscape consist of mountains and hills.
The most famous attraction in Xieng Khouang is the Plain of Jars, the largest standing over 3 meters tall, are scattered over a grassy plateau. There are more than 300 stone jars aged 2,500 to 3000 years old in this area.
Some suggested that they were used as wine containers, or burial urns.

Embark on a traditional tuk-tuk for an intriguing journey to discover the treasures of Luang Prabang.
Meet monks at a Temple, to learn about their daily life and experiences.

Visit the National Museum, the former Royal Palace which is full of national treasures.

Possibility to personalize the tuk-tuk with a company logo.

Phoenix Voyages DMC: An experienced DMC in Laos - years of experience make sure you get the best possible program for your group.  We also have an office in Siem Reap, Vietnam, Myanmar and Thailand.